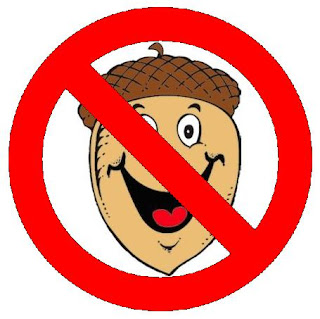 Over the weekend, the Alameda Daily Noose and I mysteriously received the following mysterious note from a mysterious Miss Ann Ominous:

Dave Williamson, you should dig deeper. You are being used. Your holy document, Measure Acorn, is obviously the work of a community organizer from the disgraced group ACORN, a known squirrel front group.

Let the Alameda Daily Noose and me be the first to step up to defend Mr. Williamson's reputation against these libelous charges. Now, you may disagree with Mr. Williamson—if you're a Wrong-Thinking Alamedan, that is—but you have to admit that his facts are always 100% correct. In fact, that's an understatement: They are usually between 110% and 120% correct.

When it comes to the subject of "Acorn," the Alameda Daily Noose and I have already done some deep digging. Alamedans are right to be concerned about the Squirrel-related activities of this shady organization. However, there is no connection between these tree-hugging troublemakers and Alameda's time-honored Measure Acorn, which, as anyone who has lived in Alameda for any time at all knows, is the only thing saving our town from the proliferation of trees and the Squirrel scourge that comes with them.

Don't be confused by similar-sounding names, Miss Animus. Just because your name sounds like "Ann on a Moose," that doesn't mean that anyone would accuse you of being from Canada, although that would explain your poor knowledge of Alameda.