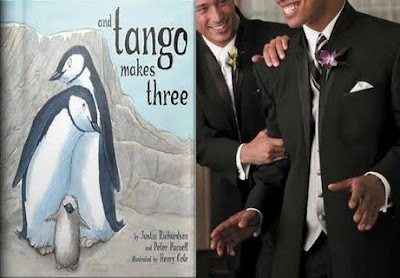 Editor,
A group of concerned citizens here in Alameda is working to remove a certain book from the AUSD curriculum. The book in question, titled And Tango Makes Three, is based in part on the story of two male penguins that temporarily form a couple to raise a penguin chick.
When it comes to this kind of subject matter, young and impressionable minds must be protected for the sake of their innocence. Discussions get introduced to young children unnecessarily and before kids are mature enough to handle these discussions with their parents. It is the duty of voting taxpayers to speak up when the schools attempt to indoctrinate our children with the values of special interest groups.
We don't want our children to get the idea that it's okay to be a penguin. We contend that teaching penguin lifestyles in Alameda's K-5 amounts to indoctrination of our children. Now, we have nothing against birds that choose to live in cold climates, and to swim rather than fly, but we shouldn't have to accept them as normal. Imagine trying to get kids on airplanes once they've been convinced that swimming is better than flying. And do we really want them to be drawn into those circles where people publicly mill around in black and white? That sort of thing may be tolerated in San Francisco, but not here in Alameda!
We're sorry to say the chilling rumors you may have heard as a result of our efforts to spread them are true. Your child will be zoologically indoctrinated in public schools. It is up to Right-Thinking Alamedans to push back against the penguin agenda. One of the more insidious aspects of the penguin agenda has been its willingness to manipulate young people's minds to promote sphenisciform behavior. We shouldn't be talking about penguins to kids who are years away from understanding what normal birds are.

Alameda's schools should focus on academics first, academics second and academics before any other issue. So for goodness sakes, let's take a hard look at this ridiculous practice of teaching schoolchildren about sports, art, music, penguins and other non-academic time-wasters. Any program that creates a diversion from academics must be challenged and reconsidered.

If you a concerned, nervous, or worried citizen who would like to serve in our Right-Thinking ranks, helping save our children from penguin propaganda in our public schools, contact "To Serve Alameda." We are a grassroots organization which has nothing to do with cooking, nor with turning island cities into appetizers for alien invaders…honestly, we don't know where anyone got that idea.
Worriedly Yours,
Hannah LaBarbera
To Serve Alameda

I don't want anyone to think I have anything against penguin, some of my best friends are penguins. I love penguins and I don't judge them, I just disagree with their disgusting habits. But I am not judgeing them, really.

If we aren't careful, next thing you know they will be letting penguins in the classrooms teaching our children.

When I was growing up, schoolchildren didn't even know what penguins were. I long for those lost days of innocence.

Gals
You have got to see this. Obama playing on XBox. Funniest video ever. http://bit.ly/bllhx1