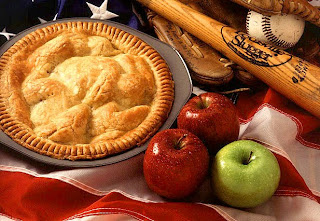 We keep receiving un-confirmed reports that Jane Sterner, of the subversive radical group known as the Alameda Apple Pie Association, also a card-carrying mother, known baseball enthusiast, and a general baked goods activist, is on the payroll of Big Apple. Sterner is well-known – well, to us anyway… – as a pastry activist in Alameda and a proponent of high-density pie development for Alameda and as a proponent of New York City's plan to obtain additional space for real estate development by annexing Alameda Point, which would be renamed "New Manhattan."

New York City is colloquially known as the Big Apple. Coincidence? Our numerous unidentified anonymous sources think not. If this pastry pusher Jane Sterner is on Big Apple's payroll – which we must assume, since she has yet to prove that she is not – she is obviously skirting public disclosure laws by accepting payment entirely in the form of bagels, pastrami on rye, and cheesecake. If Mrs. Sterner would like to confirm this, we'd be happy to publish it. If she would like to deny this, she's on her own.