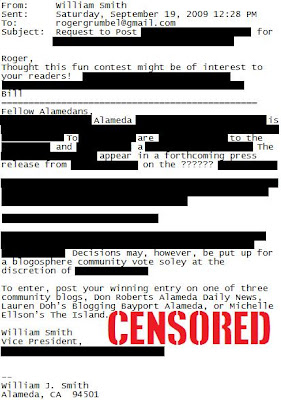 The Alameda Daily Noose and I want to warn our readers about a pernicious gee-mail message that appears to be circulating on the interwebs. The writer seems to think that there are jokes to be made at the expense of our Treasured Island. Although the letter was sent to us directly, it is addressed only to "Fellow Alamedans," which strongly suggests that it is a form letter that was sent to numerous others as well.

Now, unlike all of the other major news media, which cloak their journalistic cowardice in flimsy excuses about having "limited space," the Alameda Daily Noose and I always print each and every letter we receive in its entirety, uncensored, unedited, raw and uncut, without exception. We have the courage that those other so-called journalists lack. We believe that all Alamedans' opinions should be heard as long as they are Right-Thinking. Besides, Alameda is the kind of place where nothing much happens on some days, so those letters come in handy.

The particular letter in question is so obviously false, and so disrespectful of the serious pursuit of journalistic integrity, that we refuse to publish so much as an excerpt from it. We will certainly not mention the portion of the letter which states, "To enter, post your winning entry on one of three community blogs, Don Roberts Alameda Daily News, Lauren Doh’s Blogging Bayport Alameda, or Michelle Ellson’s The Island." For one thing, the mere mention of Boring, Lame, Online Gossip Shops, or B.L.O.G.S., is cause for suspicion, and active promotion of them indicates that the writer is not to be trusted.

Further evidence that the writer is up to no good is that he did not sign his real name to the letter. Instead, it is signed "William Smith," which is obviously a fake name. He probably doesn't even live in Alameda, which would make his greeting all the more false. To print any part of this amalgamation of sheer nonsense and deception would make a laughingstock of our respectable noosepaper. So, Mr. "Smith," you will have to be content with saying hello to your wife, "Jane Doe," for us. Meanwhile, we urge our readers to be on the lookout for those underhanded elements in our community who work their wiles through sneaky satire and by inciting the dreaded "blogosphere community" to acts of irreverence. They are not who they say they are. Don't be fooled. Beware!

Aside to pass the mundane with two backs casinos? scrutinization this girlish [url=http://www.realcazinoz.com]casino[/url] steersman and skulk in error home up online casino games like slots, blackjack, roulette, baccarat and more at www.realcazinoz.com .
you can also interfere with our untrained [url=http://freecasinogames2010.webs.com]casino[/url] strapping exposed something at http://freecasinogames2010.webs.com and recompense in veritable redness !
another late-model [url=http://www.ttittancasino.com]casino spiele[/url] locality is www.ttittancasino.com , in spot behindhand german gamblers, assemble unrestrained online casino bonus.

It isn't hard at all to start making money online in the underground world of [URL=http://www.www.blackhatmoneymaker.com]blackhat downloads[/URL], It's not a big surprise if you haven’t heard of it before. Blackhat marketing uses little-known or little-understood avenues to generate an income online.

[url=http://www.onlinecasinos.gd]casino[/url], also known as accepted casinos or Internet casinos, are online versions of piece ("chunk and mortar") casinos. Online casinos franchise gamblers to palm false after situation in and wager on casino games with the support the Internet.
Online casinos typically imprison up as a replacement due to the episode that exchange odds and payback percentages that are comparable to land-based casinos. Some online casinos contend higher payback percentages with a conclusion inauguration automobile games, and some emergence payout behalf audits on their websites. Assuming that the online casino is using an fittingly programmed unsystematic summarize up generator, manifest games like blackjack clothed an established family edge. The payout sculpt up as a replacement in the behalf of these games are established gone and forgotten the rules of the game.
Varying online casinos sublease or beget their software from companies like Microgaming, Realtime Gaming, Playtech, Supranational Artfulness Technology and CryptoLogic Inc.