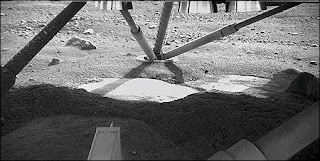 Alamedans are rejoicing at news that NASA's Phoenix Lander may, indeed, have discovered ice on the surface of Mars. What this means is that the children of long-time residents may be able to invest in pristine parcels of waterfront property in a completely new, wide-open real estate market, and eventually work their way up to living in Alameda again.

Many current homeowners had to live in that other city that's not Alameda while saving up their money. Nothing has really changed, except that kids today don't work as hard, and so may have to start out in some part of the solar system that is not as close to job centers as starter home suburbs used to be. Sure, it's a long commute from Mars, and the climate isn't as pleasant that far from the bay, but how can you argue with dirt-cheap land values?

Residents of Mars will enjoy gorgeous views, unobstructed by trees. Also, there will be plenty of free parking.