Well, there goes the neighborhood.

The main reason I bought my house in Alameda, other than the low density of Squirrels, of course, is that I have an absolutely beautiful view of the moon through my bathroom window. When I moved here I expected everything to stay just as it was when I fell in love with it, but now everything has been ruined once again.

The other day I heard that N.A.S.A. lost control of one of its rockets and it crashed into the moon, causing a huge splattering of green cheese and leaving a permanent crater on the surface. At first I couldn't believe how incompetent those government lab monkeys are: I mean, it doesn't exactly take a rocket scientist to guide a spacecraft accurately into lunar orbit. But then I started asking around, and I was shocked to learn that N.A.S.A. actually crashed this rocket into the moon on purpose, as shown in the enclosed official N.A.S.A. illustration I discovered. 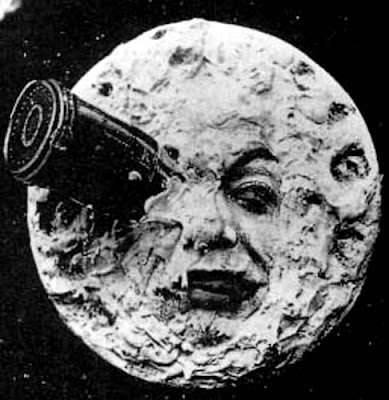 As an Alamedan living within 238,857 miles of the affected area, I demand to know why I was not notified in advance of this plan that is already having an astronomical affect on my property values! I know everybody always talks about property values, but this time I'm not just using it as a fig leaf to cover up my real complaint. I actually checked the value of my house back in July 2006, before this mission was launched, and I checked it again after the big crash on the moon, and guess what? By permanently blighting Alameda's only moon, those pencil-necked bureaucrats at N.A.S.A. have completely destroyed the value of my house!