I was reading something on the computer the other day when I ran across this: 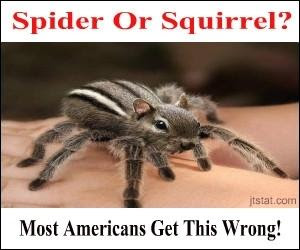 Now, unlike most Americans—or even most Alamedans, for that matter—I'm a genius, so I had no problem figuring out what's going on in the shocking photo above. I know that you will understand in a glance, but I'll spell it out for those of your readers who weren't lucky enough to be born geniuses like us.

Most Alamedans get the question wrong because they can't think outside the box the way we geniuses do. "Spider Or Squirrel"? That's a classic example of what logisticians call a false dicotyledon. Clearly, what's pictured isn't a Spider or a Squirrel, but rather a Spider and a Squirrel!

Yes, Spiders and Squirrels are one and the same. I haven't quite worked out all the details yet, but either Spiders are Squirrels in disguise, or Squirrels are Spiders in disguise. Think about it: When is the last time you saw a Spider and a Squirrel in the same room together? Coincidence? I think not.

Like all of the revolutionary discoveries of geniuses, my Spider-Squirrel hypothesis has been greeted by derisive laughter, first from my wife and kids, then from the guys at work, then from the lady at the lunch counter. I find this highly encouraging, because we all know that the more people laugh at your idea, the more ingenious it must be. We'll see how hard they're laughing when I take that all-expenses-paid trip to Finland to receive my Noble prize in zoo-ology.

At any rate, now that I have uncovered the Spider-Squirrel connection, it would behoove you to look more closely into the potentially subversive activities of that hippie-dippy environmental columnist who writes for you. When she's singing the praises of Spiders, does she realize that she is both undermining Measure Acorn and giving comfort to the enemy in the Global War on Squirrels? I call upon you to conduct a full investigation and immediately terminate her column once you find her guilty as charged.

The Alameda Daily Noose and I aren't sure which college Mr. Mirps is the dean of, but we see his point about the Spider-Squirrel connection. That would explain why Squirrels and Spiders are equally frightening. However, let's not be too hasty in our conclusions about Janet Marchant. Her pet Spider is an exception, because Miss Marchant is above reproach. We know this because we find it handy to have her columns to publish on Fridays, which are notoriously slow noose days. She saves the Alameda Daily Noose and me a lot of effort, and is therefore a trustworthy person. So hats off to you, Miss Marchant, and also to that rare creature, the helpful Spider.