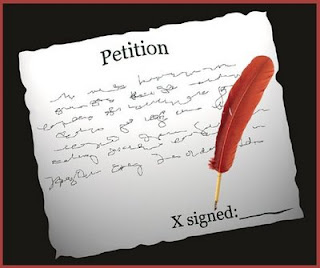 A number of petitions have been circulating in Alameda this year, and from what I hear, they have caused some confusion and anxiety among voters. A number of people are disappointed to have missed the opportunity to sign certain petitions, while others are regretting having signed them. Some, in fact, have become so mired in an indiscriminate fear of ballot measures that they are attempting to gather signatures on a petition to ban signature gathering.

Let's all take a deep breath, and remember these three time-tested principles of petitions:

If you follow these three principles, all that remains is to judge each proposition as best you can by testing it against your knowledge and personal convictions. A functioning democracy depends not only on an educated population, but also upon every individual's attention to issues of the day, and the guidance of our conscience.

Miss Oleo is clearly unaware that we Right-Thinking Alamedans deserve to be outraged at the results of our own inattentiveness. The Alameda Daily Noose and I aren't sure what else she is going on about, but it can't be anything good, because we thought we saw the word "penguin" in there somewhere.

Rog, Are you sure that Marjorie O'lio is who she says she is? Her reasoning about choosing ballot initiatives seems as kookie as the toxic process of turning oil into a solid at room temperature.
If I were an award winning Journalist like you are, I would look into her real identity. It wouldn't surprise me if she had her name changed and that her old first name became her last name and her old last name became her first name.