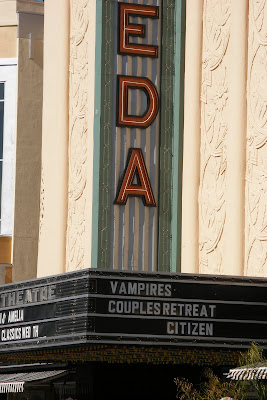 Following are the schedule and synopsis of this week's classic movie playing at the Super-Mega-Monster-Plex That Everyone Hates, 2317 Central Avenue (all times are a.m. except for those shown as p.m.):

It's 1941, and newspaper tycoon Charles Foster Kane (Orson Welles, who also directed and co-wrote the script) is dead. The opening shots show Xanadu, Kane's vast, elaborate, now unkempt estate in Florida. Following failed attempts to conceive, Jason (Jason Bateman) and Cynthia (Kristen Bell) are close to getting a divorce. In an effort to save their marriage, they book a vacation to Xanadu, which they have mistaken for a couples' therapy retreat.

Interspersed with segments of Kane's newsreel obituary are scenes of swimming with sharks and yoga sessions with an amorous instructor Salvadore (Carlos Ponce). Most puzzling are Kane's last moments: clutching an orange, he mutters, "I vaahnt to saahck your blaahd."

A young newspaperman named Darren Shan (Chris Massoglia) digs into Kane's past, seeking the meaning of his enigmatic last words. He meets a mysterious man at a freak show who turns out to be a Vampire. After a series of events, Darren must leave his normal life and go on the road to Xanadu and become a Vampire. Darren meets Jason and Cynthia, and, seeing that they have worked out their problems, frees them from the therapy and tells them to go jet skiing.

Soon Jason and Cynthia return to Darren, informing him with great disappointment that jet skiing will not be invented until 1965. As an apology and consolation, he invites them up to his room for a little drink.