This Just In! Reader's Property Values Under Attack 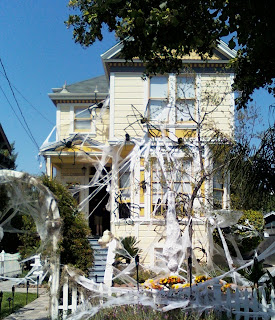 As the month of October has gone on, I have noticed gradually that the homes in my neighborhood are growing more and more dilapidated, and my neighbors are becoming less respectful of our fair city. As I drive around my street and the nearby streets I see the same thing everywhere. It's as if nobody cares about how their house looks anymore, and everything is going to pot. And what irks me is that this means that it's sending my property values down, down, down!

Let me tell you some examples of what I have seen around town:

Are my neighbors just trying to perpetuate some sort of scam, perhaps so they can drive down the property values to a point where I and other right-minded Alamedans, are forced to move out?

Please Roger, I hope you can help us get to the bottom of this nefarious plot to ruin Alameda.

Its like you read my mind! You appear to know a lot about
this, like you wrote the book in it or something.
I think that you could do with some pics to drive the message home a bit,
but instead of that, this is magnificent blog.
A fantastic read. I'll definitely be back.