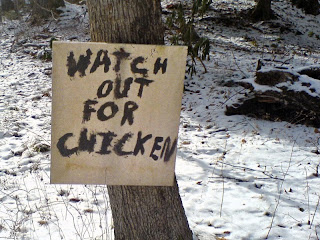 Wait. You're making fun of the chicken census? ["We're Not Chicken, Unlike Some We Could Mention," April 28] Be very careful. Backyard chicken owners are a very powerful group in this town. Most of us won't go on record, because we're afraid of retribution. But let me assure you: we are the silent majority in this town. We are backed by off-island chicken farmers with very deep pockets in their overalls and we will take our complaints to the highest coop in the land.

Signed,
Another Alamedan CIMBY
(Chickens In My Backyard)

[Editor note - we here at the Inaction Alameda Daily Noose by Inaction Alameda have no idea where the anonymous coward who wrote this letter got the idea that our hard-hitting coverage of the so-called chicken census was meant as some kind of joke. Clearly this delusional reader has us confused with that pathetic, unfunny, sophomoric, juvenile parody site that we have heard has a name very similar to an established Alameda Noosepaper - of course, we wouldn't know for sure, because we would never stoop to actually read such garbage ourselves - and which we shall not mention here for fear of giving it far more publicity than it deserves.]

Now listen here, Dave, the Alameda Daily Noose and I don't know, but maybe this CIMBY letter writer has a point. It certainly seems plausible to us that somebody who's so busy running around with Miss Grumpy Alameda that it is left to us to provide proper coverage of the Sciurine Menace might just have missed some subtle aspects of the chicken census story as well.

[Editor note - Rog, you may have been a great noose man in your day, but you clearly don't understand basic logic. It's a well-established fact that you can't count your chickens before they hatch. Furthermore, everybody knows that the egg came first, not the chicken, because the egg is what hatches into a chicken. Thus, reasoning from first principles, which are like eggs because they come first, chickens themselves simply cannot be counted. Therefore, it's obvious that the so-called chicken census actually refers to the counting of scaredy cats - colloquially known as "chickens" - not the birds that hatch from eggs. It's really quite simple, but if you still can't get it through that head of yours, stop by my office and I'll draw you a diagram.]

You can't talk to me like that, you young punk!

[Editor note - Oh yeah? What are you going to do about it, old man?]

[Editor note - Oh, dear! Is that Miss Grumpy Alameda I hear calling me? She does have a very loud voice. Sorry, Rog, but I have to run…maybe some other time…]

It seems like the chicken wire has been stretched into a tautology, with ovoid reasoning.