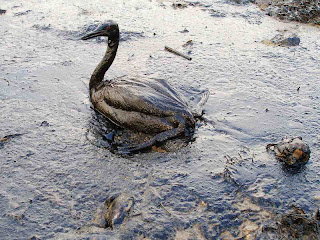 I'm thrilled to have Roger Grumbel back as the chief editor of the Alameda Daily Noose! That's good news for all of us.

Unfortunately, there's been more bad news lately for Mother Earth. I heard that there has been another oil spill, and although it's not in our own bay this time, it's even bigger and nastier than the one that had me down in the dumps last fall. There was a big explosion on an oil rig in the Gulf of Mexico, which was enough of a disaster itself, but then it also left oil leaking into the Gulf (which I found out is right up next to the United States!) Now oil is washing up on beaches in Louisiana, as if all of that hurricane damage weren't enough.

Now, there aren't many environmental disasters that get me more agitated than an oil spill. Whenever I think of nice, clean waterfowl being smothered in globby oil residue, I want to get out the organic dish soap and start scrubbing them down myself. There must be tender-hearted people doing just that right now in Louisiana, but what can we do about it here in Alameda? I've already done my part by switching my household from 3-in-1 to corn oil, and many of my friends have been inspired to do the same (or have just stopped lubricating machinery altogether) but it's looks like that's not enough. I just can't understand where all of that oil goes when it's not leaking into sensitive marine habitat.

While I was puzzling over that mystery, though, I remembered something that somebody very experienced and heroic and authoritative sounding said about offshore drilling just a year or so ago: "It's safe enough." I'm not sure why, but just hearing someone say that is reassuring. The key to easy green living is knowing when to stop worrying.