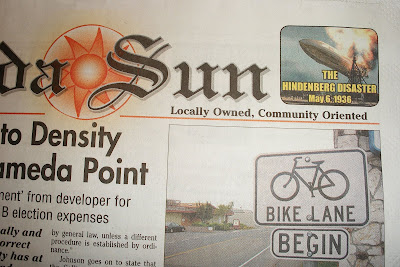 The Alameda Daily Noose and I were recently shoveling away a heap of yellowed local newspapers that had collected in that hard-to-reach corner of the front porch, when a rare item of some actual interest caught our eye. It was an image of a flaming Zeppelin hurtling towards a crowd of innocent soon-to-be-victims on the ground beneath it.

At first, we thought that our direst warnings about Zeppelin traffic in Alameda had come to pass, but of course there is no way that such a catastrophe could have escaped our notice. Puzzled, we took a closer look, and burst out laughing when we realized that the second-rate excuse for a "news" outlet was just now getting around to reporting on the long-ago Hindenburg disaster.

Our years of reporting on the Zeppelin problem have finally alerted those less gifted reporters to what's happening in Alameda. At this rate, though, they will never catch up to the most recent Zeppelin incidents. After all, the Hindenburg did its damage seventy-three years ago (which, by the way, means that the fireball hit in 1937, not 1936 as those sloppy editors seem to think), and Alameda has almost completely recovered by now. It's sad how out-of-touch with reality those self-described "journalists" are, but it just goes to show that no-one else in this town can come anywhere close to the Alameda Daily Noose and me when it comes to getting the scoop.