Green Living by Janet Marchant: A Big "Excuse Me" for One of Mother Nature's Little Hiccups 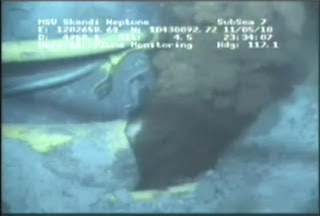 If you're like me, you've still been a little worried this past week about the big oil spill that's still gushing in the Gulf of Mexico. I mean, yes, it was reassuring to remember that these days, offshore drilling is "safe enough," which must mean that the spill isn't really much of a problem, but a little part of me was still wondering why it isn't a problem.

Then, as I was driving around town in my hybrid SUV, the answer came to me out of the ether, floating on radio waves. You see, what we've all been forgetting is that crude oil is natural. It’s as natural as the ocean water is, so all of the wildlife in and around the ocean should be just fine. Oil comes from the earth, and the earth is good, so the oil must be good too. It's as if Mother Earth just had a little hiccup that just happened to be caused by a man-made oil rig exploding. All of the fish and waterfowl in the Gulf are no more in danger than if they were animals on the side of a mountain peak with perfectly natural molten lava (also a product of Mother Earth) running down its sides in all directions. And if the oil spill is no more damaging than volcanic ash and lava would be, I can't imagine that there will be any bad economic consequences for fishermen or anyone else.

Hooray! At last we can stop worrying about the spill completely, and get back to saving the planet by buying biodegradeable forks from China, and using them to help us get rid of as many of those shamefully polluting cows as we can. In fact, I think I'll hop in the SUV right now, and go buy some steaks. Better yet, maybe I should load up the family and we can get those steaks cooked for us at our favorite steakhouse, where the T-bones come from Texas, and are almost as big as Texas! Come to think of it, enjoying some of those steaks would be a great way for people in Texas to pass the time while their beaches naturally de-oil themselves.