Announcing "Developers of Suncaltaan" Board Game! 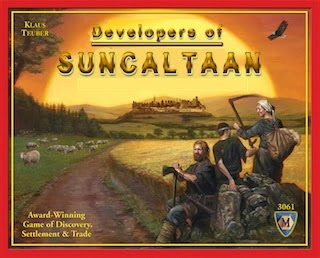 The Alameda Daily Noose and I are honored to scoop the competition in announcing the immediate availability of DEVELOPERS OF SUNCALTAAN, a fast-paced, action-packed, award-winning, family-friendly board game in which you the Right-Thinking Alamedan can pit yourself against the evil, notorious DEVELOPERS OF SUNCALTAAN to preserve your Fair Island City against the rising tide of Manhattanization! 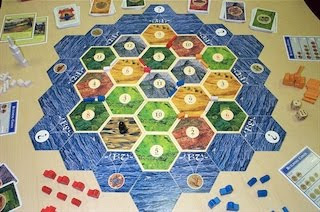 Suitable for two to four players, this board game relies on your skill—but look out for the roll of the dice!—to defeat the developers. Settle your island with Measure-Acorn-compatible dwelling units and lay new traffic-decongesting freeways, or draw "Anti-development" cards to:

Designed by German-Alamedan Klaus Teuber, DEVELOPERS OF SUNCALTAAN was awarded the coveted "Spiel des Jahres" award (Game of the Year), the even more coveted "Deutscher Spiele Preis" award (we're not sure what that means but it sounds impressive), Meeples' Choice Award. It was inducted into the Games Magazine Hall of Fame, alongside the perennial favorites MONOTONY, MANHATTANIZATION, RISKY BUSINESS, and CHESS.

Battling the developers has never been so much fun! Available at Dee-20 Games, SVN/Pharmacy, City Hall, Toy Jungle, Alameda City Chamber of Commerce Headquarters, and everyplace else fine board games are sold.