When will the Alameda City Council stop trying to control citizens' private actions? 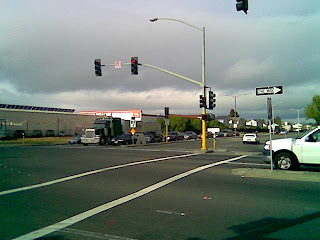 This morning, at 9:20, we took this picture of one of the City's "traffic control devices": yet another example of the big-government, pro-development direction in this town! The City Council, with its desire to turn Alameda into a Manhattan-like megalopolis, is trying to control the behavior of ordinary Alamedans, in much the same way that Stalin controlled the Soviet Union.

As you can see in this photo, traffic congestion is so bad that 7 cars are stuck in gridlock at the corner of Atlantic and Webster just waiting to go through the tubes.

When will the members of the City Council learn that it is not their job to control us?! We have a Constitutional right to drive where and when we want! Alamedans need to stand up and tell the members of the Council to stop with the "traffic control" and build more roads so that we can move unfettered throughout our city without this terrible congestion problem that they've created.