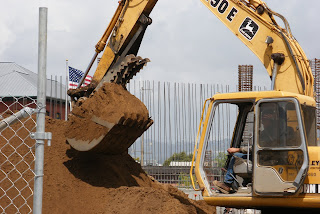 Today the Alameda Daily Noose scooped all of the other news media yet again. This time, we dug up the real dirt on the cine . . . er, I mean, super-mega-monster-plex project that everyone hates. As you can see from the photo, this is, without a doubt, our biggest scoop yet!

Despite the rosy financial predictions of the spin-meisters behind the super-mega-monster-plex that everyone hates, our photo proves that the project is already deep in the hole. This comes as no surprise to us, since we all know that the movie industry is dead, dead, dead. Everybody knows that the VHS video recorder killed the industry way back in the ‘80’s, and that it was killed again by the laser disc player in the ‘90’s, and then again by the DVD player in the ‘00’s. Hasn’t anybody seen the “Friday the 13th” movies (at home, on a DVD player, of course)? Just like Jason, this time the movies are dead for sure!

The super-mega-monster-plex project that everyone hates will be lucky if it manages to attract a moth to the light of the projector at the first screening. Of course, in reality the moth will drop dead before it gets anywhere near the theater, because the air will be so thick with exhaust fumes from all the traffic choking the surrounding streets, battling to get in and out of the six-hundred-story parking garage that is growing like a tumor on the side of the historic Alameda Theater! All of those people not going to the movies, driving all of those cars, and everywhere, everywhere, the children are threatened. The children!

This whole super-mega-monster-plex project that everyone hates stinks to high heaven. In fact, our Pulitzer-prize-eligible photograph confirms what all right-thinking Alamedans already knew: City Hall is almost completely buried in dirty politics! For now, the flag of freedom still waves above the filthy pile of muck, but for how long? I ask you, for how long?!

Yes but how do we know what the long term effects of studying all these factors for at least the next ten years will be? What if that KILLS CHILDREN!!!

Slow down, NofActsDave, whoa there, let's not get over excited. We first need to have a long term study of the impacts of doing a long term study. Sure, it may take just a weensie bit longer, but how can you put a price on a child's life??? Or would you rather have THE BLOOD OF A DEAD CHILD on your hands, is that what its going to take, will that make you happy, will it?

Excuse me but the commenter's name was "NoFactsDave" not "NofActsDave" please check your facts before typing NoFacts ... thank you.

I never let fActs get in the way of my opinions.