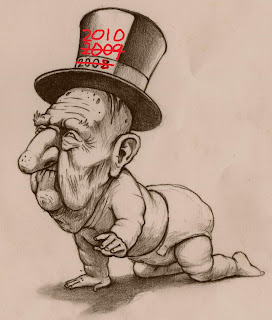 The Alameda Daily Noose and I just love to make predictions for the new year. We are so good at making predictions that we don't bother reviewing our previous predictions for accuracy, for that would take up valuable time we could otherwise spend gloating and saying, "I told you so."

The aughts have been a fine decade for outrage and indignation, righteous and otherwise; however, next year alone promises to make the last decade look like a garden party by comparison. Yes, the Alameda Daily Noose and I are talking about the special election on February 2, 2010, better known as The Single Most Important Event in Human History.

Despite the fact that everyone in the world will be voting "no" on Measure B (as in Bagpipes) in February, it's worth pointing out that a "yes" on B would mean the end of Alameda and Greater Alameda (sometimes referred to as "the world") as we know it. Under the utopian guise of so-called Tartan-Oriented Development, the Evil Developer would first construct massive peat bogs and, like the vile Robert the Bruce of Scotland, use them to defeat his enemies, the Right-Thinking Alamedans. Like Pharaoh, he would order the building of great pyramids out on the old Navy base, enslaving an army of Alamedans to accomplish the task. Then, like Alexander the Great, he would weep, for there would be no more Alamedas for him to conquer. Finally, in an apocalyptic, apoplectic climax, all of Alameda Point would sink into the sea, like the doomed city of Atlantis, dragging the rest of Alameda down with it. Life as we know it would cease, and an eternal pall of darkness would fall over Greater Alameda.

In other words, Measure B is Bad. NO on B.