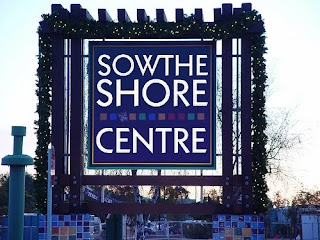 The shopping center formerly known as "Alameda Towne Centre" has been renamed "Sowthe Shore Centre" in order to keep up with demands of upscale Alameda shoppers to reduce confusion.

The new name was unveiled at a ceremony this morning, presided over by ATC manager Richard Corbin, Mayor Beverley Johnson, Alameda Chamber of Commerce President Mick Whitfield, and — some say, perhaps former State Senator Don Perata (though this cannot be verified by photos taken at the event).

The unveiling of the new signage took place at the main entrance to the mall, with its flagship stores, Mervyns and J.C. Penney, in the background.

"We are pleased to change the name of this venerable shopping institution to a name that will be less confusing for Alameda shoppers," said Richard Corbin, manager of the newly-renamed Sowthe Shore Centre. "We found that Alamedans were often driving around the MIDDLE of the island, looking for their favorite mall, due to the confusing name we were using."

"We hope that Alamedans will have less trouble finding us now that our name indicates that the "centre" is on the "sowthe" shore of the Island City," Corbin added.

When asked about the unusual spellings, the manager explained that they wanted keep some of the "old-fashioned" charm that was part of the original name, and that research shows that people spend more at malls with oddly-spelled names.
The Alameda Daily Noose and I applaud the decision to update the name.