Today, I received a flyer in the mail urging me to vote No on Measure B. Naturally, like all right thinking Alamedans, I was planning not only to vote no but to picket the houses of anyone who dares to display a pro-Measure B yard sign. However, I noticed something very sinister in the upper left hand corner of the mailer: 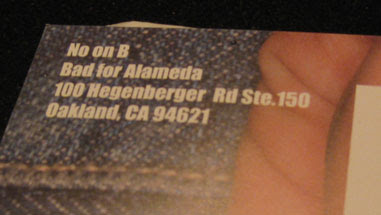 No on B is headquartered in The City that is Not Alameda!! I don't know about you, but I find that extremely ominous. How am I supposed to believe that voting No on Measure B will protect our treasured isle when apparently, the anti-B forces are coming from across the estuary? For all we know, this is the first step in a "Trojan Horse"-type of master plan that will lead to that other city sending all of its bagpipers to Alameda. I urge you to look into this shocking development to find out who is REALLY behind Measure B.