The Alameda Daily Noose and I were somewhat puzzled when we received the press release below. It seemed to have something to do with automobiles, which we love, but also involved art. We all know that you can't always trust artists, so the Daily Noose and I did some investigating, and discovered that automobiles and fine art really do go together! 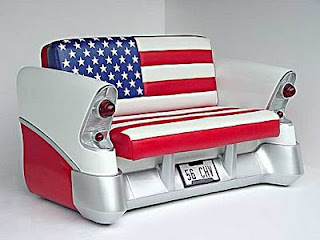 This sleek, cable access-watching pedestal is the kind of art that any Right-Thinking Alamedan could be proud to have in his own living room. It's hard to believe that one of those kids these days, with their so-called skate-boards and ball-point pens, could produce anything with such depth and clarity of purpose, but it takes only a cursory reading of the press release to convince us that this young Mattie G. has a way with found objects and vinyl:

Autobody Fine Art is proud to present a solo show by artist Matt136. This will mark the first time in Autobody's history that we have given one artist the entire space to work with and it is a testament to the remarkable skill, dedication and creative purpose that is evident in Matt136 artworks.

The exhibition will feature a variety of works ranging from minutely detailed drawings that elicit Renaissance comparisons with Durer and Michelangelo, to brightly colored assemblages that carry complicated meaning within their formal arrangement. A cast of recurring characters appear throughout the artwork including a plump little rat, symbolic images of the artist himself, flying toasters, hand grenades and Michael Jackson alongside numbers and text which in their specificity allude to a greater narrative. For this show Matt136 will be producing a site-specific mural within the space which will tie in with the multiple other elements occupying the gallery walls. As the viewer attempts to take in the installation as a whole, this rhythm will be interrupted as the eye alights on individual art pieces that captivate through charm and idiosyncrasy.

Matt136 is meticulous in his craft. Old vinyl records are sawn into landscapes across which people and animals march and a simple ball point pen is used to produce highly detailed images through repetitive cross hatching. As a skateboarder, Matt136 has produced a number of skate decks and also deconstructs the boards themselves to act as environments for his characters. The work is obsessive and extremely focused but retains a playful, almost cartoon-like quality that allows Matt136 to address complicated personal and social issues while still seducing his audience. Drowning drunks, insecure parents and a variety of levels of frustration are all mirrored in his characters, as is a celebration of the diversity of emotions and challenges that face both the artist and his audience.

For a full biography and more images please contact Amy George, Gallery and Event Director at 510.865.2608, or at info@autobodyfineart.com

Thanks for the post about Matt136 but Autobody Fine Art is not about automobile art. The gallery's name is mearly a homage to the building which was home to a machinist. The photo you included is not an example of Matt136's work. I emailed Alameda Daily Noose because I thought you would be interested in the ever growing art scene in Alameda. Thanks again but please go to www.autobodyfineart.com to see photos of Matt136's work.