Early this morning, we closed the online-only straw poll which asked people exactly how outraged they are over the online-only survey conducted by Alameda Unified School District President Mike McMahon. Here are the results.

A straw poll, by its definition, is un-scientific, and non-binding, which means we can load up the questions with as much bias or slant as we want. However, that didn't stop people from voting "not all that outraged" anyway, so apparently the questions weren't leading enough. Besides, we don't remember those critics speaking out against Mike McMahon's biased, self-serving online-only survey.

But our purpose was to get people talking about how outraged they are at Mike McMahon in particular and the School Board in general, and many people who responded were appropriately outraged. Here are the results across all eleven options: 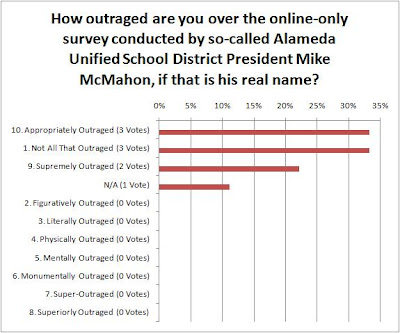 In addition, six of the nine respondents took the time to explain their outrage in great detail. 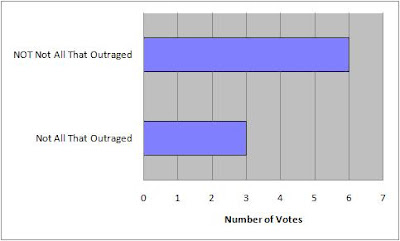 Everyone knows that two negatives completely cancel each other out; it's elementary logic. Thus, the vast majority of people are all that outraged over this online-only survey by AUSD Board President McMahon, and we know there are at least six of them out there just itching to be the first ones to sign that recall petition!