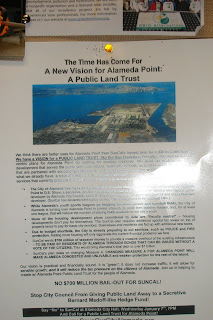 Rog,
Yesterday, I snapped a picture of a secret campaign poster that was obviously put up by those people who are bent on destroying Alameda. This slick, glossy poster advocates forming a so-called public land trust for Alameda Point. Hah! More like a public land distrust. You can never trust people who use so many exclamation points in their writing! Also, you can never tell when an innocent-looking patch of land will sprout new buildings without any warning apart from years of public meetings, workshops, and requests for input via surveys! No doubt that is what they expect to happen on the "open space" they are promoting. They want Alameda Point to be like the Presidio, which means that we would soon be fighting off legions of modern art museums and the horrendous traffic that would result from those museums.
This slick advertising can't be the work of anyone who actually lives in Alameda. Whoever this shadowy group is, they must have deep pockets to be able to plaster the town with big, glossy posters. What chance do honest citizens have against such a well-funded political juggernaut? We at Inaction Alameda call upon all Right-Thinking Alamedans to oppose the efforts of this untrustworthy bunch at every turn.
Dave Williamson

I'd sure like to know who the billionaires are behind this public land distrust, too. Probably folks from the Pacific Injustice Institution in Sackymenny or some such befind this plot, or even worse, Communists like Ronald Reagan was...

Public land trusts are just socialized real estate, you know. Just as bad as MedicAid for the rich, I tell you.

Probably backed by a bunch of Veterans and other riff-raff, too...