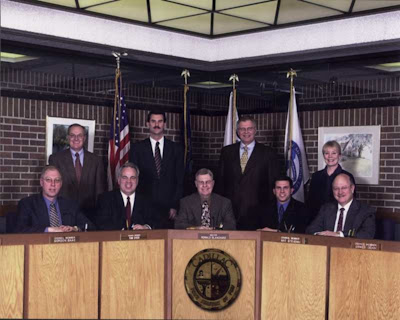 Pictured above: The new Alameda City Council (minus Mayor Johnson; she had to leave the council chambers for a restroom break during public commentary) in their first Brown Act violation.


In a surprise press conference in City Hall this morning - only the Noose was there - Mayor Beverly Johnson unveiled the appointment of five members of "Actual Alameda" to the City Council, balancing the obviously biased elected council with a group of unelected citizens, largely comprised of defeated council candidates, in an effort to bring balance and stalemate to city government.

The new members of the City Council:

"I'd like to thank Mayor Johnson, shill to developers and Santa Perata, for appointing me and my colleagues," said the new co-mayor Gwendolyn Langston. "We are proud to usher in a new era of backstabbing, innuendo, and belligerence that has never been seen before in Council chambers."

"As your elected Mayor," Co-Mayor Johnson Added, "I'd like to welcome —." Mayor Johnson's speech was terminated quickly by the insertion of several marshmallows into her mouth. Co-mayor Langston continued "— The Alameda Daily Noose and our assembled citizens here for our first historic gathering as a council of ten, which, incidentally, violates the Brown Act, which means I'm going to have to call for the resignation of everybody here."

We will continue to update you as this story develops.