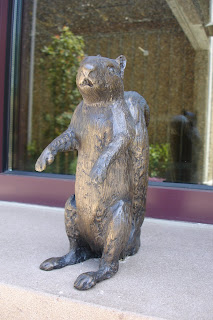 Recently, presumably under cover of darkness, the Evil Developers of The Shopping Center Formerly Known as South Shore unveiled the starkest evidence yet that they are working hand-in-paw with the greatest threat Alameda has ever known: Squirrels. Yes, right there in a public open space, in full view of everyone, including children, is a life-sized bronze statue of a Squirrel rearing up on his hind legs, poised to unleash a terrible attack on an unsuspecting populace!

Alameda Daily Noose and I have long suspected that the Evil Developers and the Squirrels have been conspiring to create a secret alliance to destroy Alameda. We had warned that Alamedans should not wait until they had "proof" . . . but now we have that proof, in the form of a life-sized bronze statue! Now the unthinkable has come to pass, and it's time for all right-thinking Alamedans to raise your voices (and whatever implements you might just happen to have in your hands) high and shout in protest!

In response to the imminent threat, a new community group has spontaneously organized: "Save Quiet, Unspoiled Islands from Rapacious Rodent Evildoing Limb-Hoppers Attacking, Terrorizing, and Endangering Residents: Squirrels!" (S.Q.U.I.R.R.E.L.-H.A.T.E.R.S.!).
S.Q.U.I.R.R.E.L.-H.A.T.E.R.S.! have issued the order for all right-thinking Alamedans to gather at The Shopping Center Formerly Known as South Shore tonight at twilight. S.Q.U.I.R.R.E.L.-H.A.T.E.R.S.! would like one volunteer to bring a Hummer or other large SUV equipped with a winch, because as our boys in Baghdad discovered, it can be tricky to bring down one of these hideous bronze statues on "people power" alone. The dress code is "angry mob casual"; please bring your own pitchforks and torches.

I, for one, welcome our new rodent overlords.