ACLO, Bastion of Immorality and Inaccuracy, to Shut Down 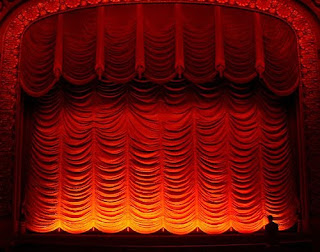 Alameda Civil Liberties Opera (ACLO) announced yesterday that they have closed their curtains for the last time. Their press release cited "financial difficulties due to the recession" but we here at the Alameda Daily Noose know better.

First of all, there is no recession. The economy is going great, and as columnist Janet Marchant will tell you, it's also going green. Why, all you have to do is look at the fact that the oil companies are allowing millions of gallons of crude oil to gush freely into the ocean (thankfully, not the ocean attached to Alameda, so we don't mind) to show you that our oil-based economy is doing just fine if such untold riches are allowed to go to waste.

But the Alameda Daily Noose and I digress. We know that the theatre company has closed up due to public pressure, no doubt something we helped bring upon them. Wasn't it vigilant ADN reader who helped expose the red-light district that ACLO was trying to establish? And remember when ACLO was begging for money right around Christmas time a year ago, when clearly they had already gotten money from ticket-purchasers? (How uncouth!) How about when ACLO admitted in a letter to the Noose that the theatre was haunted? Surely they must have known they were scaring patrons away -- not good business acumen if you ask us!

Worst of all ACLO offenses was the way that their "operas" (How can they be operas when the performances were always in English?) portrayed life in Alameda so inaccurately. Case in point: West Side Story, which reader Lynn Irving reviewed and exposed as a sham. And then there was Ragtime, produced last year, which peddled an unlikely story about immigrants (still shuddering!) to Alameda, and falsely depicted a green, torch-bearing statue in nearby estuary waters. There is no such statue anywhere off the coast of Alameda; the Daily Noose and I checked.

It's high time that this bastion of thespianism is closed for good. We say Good-bye to ACLO, and trust that hereafter, the perilous world of opera will never again darken Alameda's doorstep!